“THE CHRIST OF GOD”

THE word Christ or Kristos is a Greek word, introduced into our English language, but not translated into it. Its translation is, ANOINTED.

“Unto us a child is born,” etc., and “they shall call his name Jesus.” The name Jesus means Deliverer or Saviour, and the child was named in view of a work he was to do; for we are told, “he shall save his people from their sins.” Jesus was always his name, but from the time of his baptism, when the Holy Ghost descended upon him and anointed him as the High Priest, preparatory to his making “the sin offering” on the cross, and thus accomplishing what is indicated by his name, his title has been “The Anointed,”—Jesus “the Christ (anointed) of God.”—Luke 9:20. [Compare Acts 10:37,38.]

Jesus was frequently called by this title instead of by his name; as English people oftenest speak of their sovereign as “the Queen,” instead of calling her by her name—Victoria.

But, as Jesus was in God’s plan as the anointed one, before the foundation of the world, so too THE CHURCH of Christ, was recognized in the same plan; that is, God purposed to take out of the world a “little flock,” whom he purposed raising above the condition of the perfect human nature, to make them “partakers of

the Divine nature.” The relationship of Jesus toward these, is that of “Head over all, God blessed forever;” “for he hath given him to be head over the church (of the first-born) which is his body.” As Jesus was foreordained to be the anointed one, so we, also, were chosen to the same anointing of the Spirit, as members in his body and under him as our head. And so we read (Eph. 1:3:) “God hath blessed us with all spiritual blessings in Christ according as he hath chosen us in him before the foundation of the world, that we should be holy and without blame before him in love; having predestinated us unto the adoption of children by Jesus Christ to himself … wherein he hath made us accepted in the beloved.” (See also vs. 20-23.) Again, (Rom. 8:29,) “Whom he did foreknow he also did predestinate to be conformed to the image of his Son, that he (head and body) might be the first-born (heir) among many brethren.”

God’s plan of saving the world by a “restitution of all things,” waits until first, this bride of Jesus—these members of the Spirit-anointed body, shall be gathered out from the world according to his purpose. God’s intention being to display to the world his wonderful and mighty “love wherewith he loved us,” as we read (Eph. 2:7,) “He hath raised us up together … in Christ Jesus, that in the ages to come he might show the exceeding riches of his grace (favor) in his kindness toward us in Christ Jesus;” for we are “elect according to the foreknowledge of God the Father through sanctification (setting apart) of the Spirit unto obedience and sprinkling of the blood of Jesus Christ.”—1 Pet. 1:2. This shows us that the election is not an arbitrary one. God elected, first, that Jesus should taste death for us, thus releasing us from death; second, that the knowledge of this redemption should be declared; third, that those who believe the proclamation should be invited or called to become “partakers of the Divine nature,” “heirs of God, joint heirs with Jesus Christ their Lord, if so be that they suffer (death) with him that they might be also glorified together,” (Rom. 8:17)—his purpose being, that when this “promised seed” is developed, that

in, through, or by it, “all the families of the earth shall be blessed.”—Gal. 3:29. This seed is to crush the serpent’s head, (Rom. 16:20,) thus destroying evil, and bringing about “the restitution of all things.”

To be thus a part of “The Seed,” “The Christ,” we must see to it that we comply with the conditions, [suffer death with him if we would be found in him,] thus making our calling and election sure. We make sure of our being part of the elect company by obedience to the call: for, “They that are with him are called, and chosen, and faithful.”—Rev. 17:14. Being faithful to the call insures our position among the chosen. “They that follow the Lamb whithersoever he goeth,” in the future, are the same that bend every power and lay aside every weight to “walk in his footsteps” here.

A beautiful illustration of our oneness with Jesus, as members of his body, is shown in the anointing of Aaron as high priest. All of the anointing oil [type of the Holy Spirit] was poured upon the head; the under priests stood by, their heads covered with bonnets, (Lev. 8:13,) indicating thereby that they were not the head. Aaron, who stood with uncovered head, was the head of their priesthood. They took part in the ceremony, and were anointed symbolically in him as members of his body, for the oil poured on the head ran down over the members of the body, as we read, (Ps. 133:2,) “It ran down the beard, even Aaron’s beard: that went down to the skirts of the garments.” So we, who claim not to be the head, but members in Christ’s body, receive full anointing by the same spirit. “For as the body is one, and hath many members, and all the members of that body, being many, are one body; so also is Christ, for by one spirit are we all baptized into one body.”—1 Cor. 12:12. “As many of us as were baptized into Jesus Christ were baptized into his death.”—Rom. 6:3.

Our oneness with Jesus, as members of the Christ—anointed body—may be clearly illustrated by the figure of the pyramid: 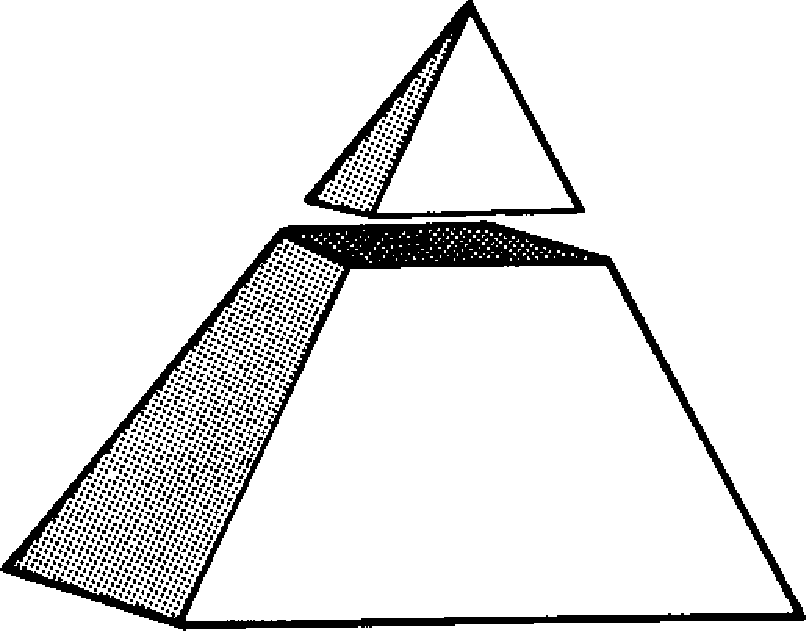 The topstone is a perfect pyramid of itself; other stones may be builded under it, and if built in exact harmony with all the characteristic lines of the topstone, the whole mass will be a perfect pyramid. How beautifully this illustrates our position as members of “The Seed”—”The Christ;” joined to, and perfectly in harmony with our head, we are perfect; separated from him, we are nothing.

Jesus, the perfect one, has been highly exalted, and now we present ourselves to him, that we may be formed and shaped according to his example, and that we may be built up as a building of God. In an ordinary building there is no “chief corner-stone;” but in our building there is one chief corner-stone, the “topstone,” as it is written, “Behold, I lay in Zion a chief corner-stone, elect, precious”—”to whom coming as unto a living stone … ye also as lively (living) stones are built up a spiritual house, an holy priesthood, to offer up spiritual sacrifices acceptable to God by Jesus Christ.”—1 Pet. 2:4-6. And, very soon, we trust, the union between Jesus and the body will be complete, as expressed by the Prophet: “He shall bring forth the headstone, thereof, with shoutings of grace, grace unto it.”

And, dearly beloved, many blows and much polishing must we have—much transforming we must undergo, and much conforming unto his example, under the direction of the great

Master-builder; and in order to have the ability and ideality of the builder displayed in us, we will need to see that we have no cross-grained will of ours to oppose or thwart his will being done in us; we must be very childlike and humble—”Be clothed with humility, for God resisteth the proud, but giveth grace to the humble. Humble yourselves, therefore, under the mighty hand of God, that he may exalt you in due time.”—1 Pet. 5:6.

The following text will be sent to our editors: